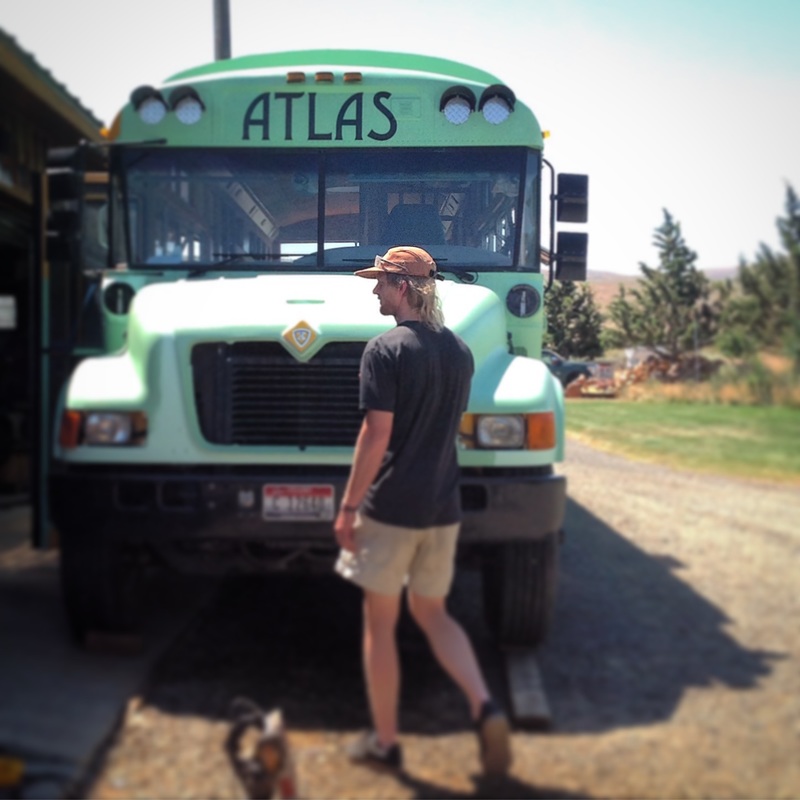 ​         Long time no see! Holy smokes, riding the wedding wave pretty much took it out of us. Jeremy’s twin brother got married and that was the better part of a week to get that all ready, and then we attended another wedding a few hours away two days later. When that was all over we got right back at it with the bus, and here we are both run down and feeling sick. Just trying to get as much done as we can while we have tools like the welder etc. In a few days we head back to where we call home for now, Driggs, Idaho. But our hard work is paying off because it’s looking epic! And for such an epic bus we needed an epic name, and it finally just came to me: Atlas! The name comes from the Titan god of endurance and astronomy, who revolted against the Olympians. His punishment from Zeus was to stand at the edge of the earth and hold the heavens on his back for eternity. Harsh much? Who’s to say.  Anyways, the name fits the bus’ personality perfectly. Bad. Ass.
So we have a lot to catch you up on. We left off with a rusty floor and a baby blue paint job. Jeremy ripped up the plywood from the floors and realized it was COMPLETELY rusted over. All of it was toast, even a couple small spots where it was rusted all the way through. EEK! So that added another step for us, but a necessary one if we want to extend the structural life of the bus. So if you’ve never heard of rust converter, and you need to get rid of rust, check dat out. It worked like a gosh darn charm. First all the rust needed to be grinded off as much as possible. Then you paint on the magic potion (rust converter), which turns the rust black and stops it from rusting any further. On top of that he painted a coat of glossy black enamel. What a mess though, Jeremy was coughing up rust, blowing completely rusty boogers (he was wearing a mask, but it didn’t do much). There was just sooo much rust. His hair looked red and his skin looked sunburned by the end of it. I was slightly worried for his health. But them Holmstead genes are bulletproof, if anything he’ll probably just get sweet spiderman-like super powers. We’ll see, I’ll keep ya posted. So the floor be lookin good now, and on top of that went the insulation boards covered by particle board.